Fires Everywhere
Over the last year, EcoFlight has been at the forefront of capturing the devastation of wildfires in the West. Just recently, we completed two sets of media flights over California fires, one while the state was still burning last fall, and another to assess the damage over the wine regions of California in May of 2021, to look at the fires that have devastated that area since 2017.

Fire has been a natural and important part of California’s landscape, but today’s fires are more severe and more destructive. A history of fire suppression, logging of large fire-resistant trees, and climate change fueled drought are all ingredients for these more destructive fires we are starting to see. In the West’s current severe drought, we are seeing a longer fire season that starts earlier, and experts are especially concerned about this summer’s fires.

From the air, there is a clear difference between the more natural and less-severe, “mosaic” type of fire, versus the more destructive fire. Our flights helped fire scientists and the press take stock of the devastation, as they discussed wildfire management and fire science while California develops wildfire funding plans. EcoFlight was also part of a collaborative communications project aimed at increasing media coverage of wildfire solutions and fire science in California.

Walker Ridge – A Hidden Gem in California Walker Ridge shines in the springtime. This ecological treasure with renowned biological diversity and fascinating geology was carpeted with wildflowers, and EcoFlight gave a diverse group of stakeholders and media a look at this gorgeous area, adjacent to Snow Berryessa National Monument.

Walker Ridge is a frequent target of energy developers. The latest proposal comes from Colusa Wind LLC (aka Algonquin Power and Utility). The international company wants to build an industrial-scale wind development on BLM public lands in a largely undisturbed ridge area. The area is home to at least 27 rare plants, 11 of which are globally rare and endemic to this small area of California.

Our partners are asking the BLM to permanently designate Walker Ridge as an Area of Critical Environmental Concern (ACEC) which would prevent future energy development on this hidden gem of biological diversity, unique geology, and critical wildlife connectivity.

Lithium Mine proposed for Peehee mu’ huh (“Rotten Moon”)
Also known as Thacker Pass, this saddle between two mountain ranges is in the sagebrush steppe of northern Nevada. A Canadian mining company called Lithium Americas plans to destroy 5,700 acres of Thacker Pass, gouging an open pit one-mile-wide by 2.3 miles long, to extract lithium. If built, it is likely the mine will grow to more than 17,000 acres and operate for more than 100 years. The mine would run 24 hours per day, 7 days per week, using 1.4 billion gallons of water and 4.1 million gallons of diesel fuel annually. The site would also include a chemical plant that processes sulfur (likely sourced from tar sands oil refining) into sulfuric acid to purify the lithium.

Thacker Pass is the sacred ancestral land of the Northern Paiute people who still live nearby, and regularly hunt, fish, gather, and engage in ceremonies in and around Peehee mm huh. The Fort McDermitt Paiute-Shoshone Tribe are asking for help in protecting this place and the water that originates in these mountains, for the sake of future generations and wildlife.
The rise of electric vehicles and prolific use of devices like mobile phones and laptops has driven a spike in demand for lithium. If this technology is truly meant to replace fossil fuels, we must ensure that it is done responsibly, and avoid mining in places that are sacred to indigenous communities or in critical wildlife habitat.

Beartooth Plateau
EcoFlight conducted a set of winter flights in the northern Rockies over the High Lakes WSA and Togwotee Pass in the Shoshone National Forest documenting winter travel areas with a coalition of our northern partners, as they develop a winter travel management plan. We shot 360 GoPro footage, created virtual tours of the areas, and used photos to identify areas where balance is needed between areas designated for motorized use and lands with wilderness characteristics.

Snowmobiling has become much more accessible since 1984 when the WSAs were created, and there are more opportunities for conflict between snowmobiles and wildlife (including grizz, wolverine and pika), non-motorized winter recreationalists, and impacts to alpine water sources, soils and rare alpine plants.

Partner Spotlight – Frank Ruiz
Frank Ruiz co-founded and led Por la Creación, a faith-based coalition that seeks to engage Latino Youth and families through education and advocacy in areas of conservation and public policy. He then became the Salton Sea Program Director for the Audubon Society where he has helped secure over $280 million for the implementation of the Salton Sea Management Plan, engaged hundreds of local, state, and federal elected officials, and informed thousands of people of the environmental and public health crisis at the Sea.

Frank has organized dozens of flights with faith and community leaders, conservationists and media, and made quite an impact. “EcoFlight has been an incredible source of help to build awareness about the importance of protecting this body of water and the people and birds that depend on it. Having the opportunity to fly dozens of elected officials, media, community leaders and concerned citizens has built the awareness substantially.”

Letter from the President
It’s a new day, it’s a new dawn. We are once again filling the planes with actual people. Yes, real live people, not just the virtual kind. We are continuing to create our online virtual tours as they have been so successful and we are back in the business of educating our passengers from the ‘wow’ perspective in a small plane above their favorite landscapes. Leadership in the agencies has changed thanks to a new administration and our new leadership is a lot more friendly to conservation in general, and taking a stand on climate change in particular. Never an easy subject but at least the discussions are based on science instead of rhetoric. It’s a long road ahead, and action needs to be initiated immediately. If you get to “look” around as I do in the West, it is abundantly clear that radical changes need to be made, and fast.

Our flights documenting fires in California and Colorado both in 2021 and 2020 revealed huge amounts of our forests decimated by intense fire while the remaining forests are still recovering from past fires. Even in my home state of Colorado we have rarely if ever seen fire events like we experienced last summer. And here it is early June, and on a recent flight I could not see my beloved Mt. Sopris from 20 miles away due to fires burning in Arizona and Utah.
We are now addressing these unprecedented challenges on many fronts. With plane-loads of press on recent flights in California over the tragic fires in Sonoma County; fire scientists, forest managers and local activists were proactively planning fire mitigation before fires occur as opposed to during the event itself. Strategies to combat future fires are being implemented and the public is being informed about the challenges that we collectively face.
Flying with Fish and Wildlife officials over the recent Mullen fire in Wyoming they were shocked to see that spring runoff was essentially over, and it was evident flying back to Colorado that little snow remains in the high country. Severe historic drought conditions continue throughout the West, and flying over Lake Mead was shocking, with it at an all-time low of 36% capacity and dropping.

So, as we continue into our busiest of seasons, we are empowered by knowing that there is a concerted effort not only by the conservation community but by the Federal Government to work towards a sustainable future for a healthy environment. It is indeed a pleasure to be operating in a normal way, sleeping at hotels instead of camping on the ground under the wing, and bringing the aerial perspective once again to activists, scientists, media and politicians in a way that encourages engaging conservation conversations in the cockpit.
Best,
Bruce 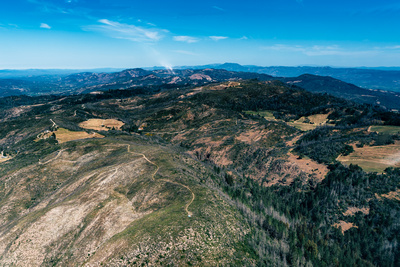 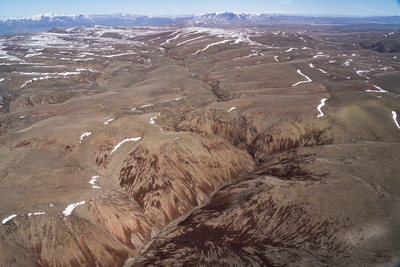