Two Steps Forward, One Step Back for Uranium Mill near Bears Ears.  

Two Steps Forward, One Step Back for Uranium Mill near Bears Ears.  

The air was clear, warm, and slightly breezy at the Blanding airport in southeast Utah last month, as we waited for EcoFlight pilot Gary and communications technician Amanda to arrive at the airstrip. Bears Ears Inter-Tribal Coalition staff and community members from nearby White Mesa and the Oljato Chapter of the Navajo Nation were anxious to get in the air. Our flight plans would take us on scenic loops around central Bears Ears National Monument and over the controversial White Mesa uranium mill, an industrial facility one mile east of Bears Ears and a few miles north of the White Mesa Ute community.

According to the U.S. Environmental Protection Agency (EPA), the mill has been violating the Clean Air Act since at least June 2020, leaving radioactive material that is required by law to be covered in liquid to reduce emissions of cancer-causing radon gas uncovered. I was eager to see what efforts were underway at the mill to correct the violation.

Though the weather was almost perfect, the sight that met our eyes from over the White Mesa Mill was not. From the air, it appeared that although the mill’s owner, Energy Fuels Resources, had begun to fill an inadequately covered waste pit with liquid, another showed signs of possibly drying out.

An August 2021 overflight had revealed that one of the mill’s waste pits, known as Cell 4B, was not covered as legally required to control radon emissions.

That overflight and the Ute Mountain Ute Tribe’s advocacy resulted in the mill’s primary regulator, Utah’s Division of Waste Management and Radiation Control, issuing a compliance advisory to the mill’s owner in October 2021. In December 2021, the EPA barred the mill from accepting radioactive waste from Superfund sites for processing and disposal, including waste from the Midnite Mine on the Spokane Indian Reservation.

EcoFlight flew staff from the Ute Mountain Ute Tribe over the mill again in April 2022, and to our surprise, there appeared to be even less of a liquid covering in Cell 4B then than in 2021. That’s right — instead of correcting the problem, the mill’s owner had allowed it to get worse while appealing the state and the EPA’s decisions. 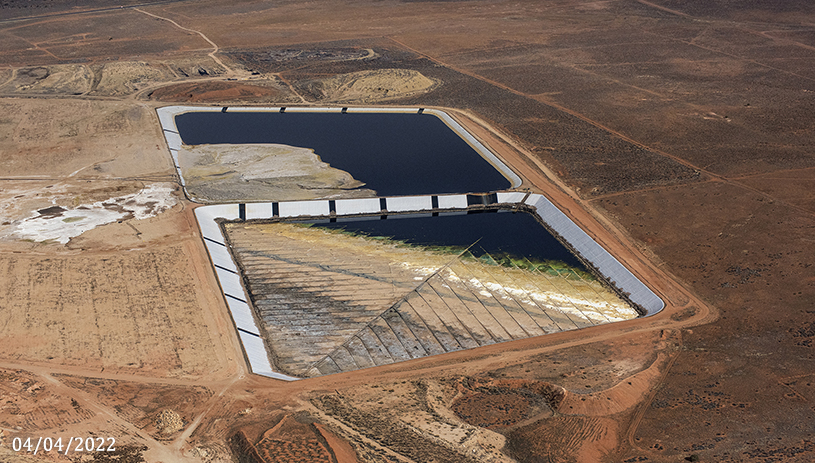 Exposed waste in Cell 4B (at bottom) in April 2022. TIM PETERSON, FLOWN BY ECOFLIGHT

What we observed in July 2022 was slow progress: a large area of solid material remained visible in Cell 4B, which, according to the law, should be entirely covered in liquid. Shortly after our April overflights, the mill’s owner began filling Cell 4B, but by July, it remained a long way from full. 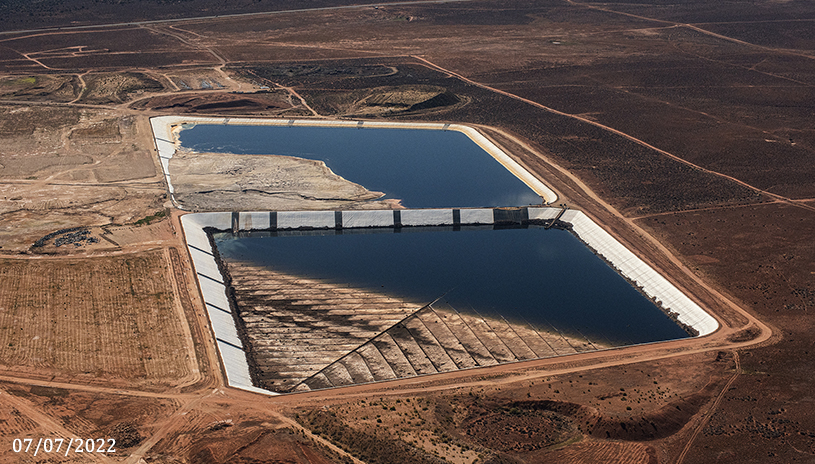 Exposed waste in Cell 4B (at bottom) in July 2022. TIM PETERSON, FLOWN BY ECOFLIGHT

In May 2022, the mill’s owner estimated that it could take until early 2023 to completely fill the 40-acre waste pit with liquid. Why so long? Ordinarily, the mill would rely on water from nearby Recapture Reservoir to fill the pit, but due to severe drought conditions, that option is off the table. Instead, the mill’s owner must pump water from wells at a rate of only 200-300 gallons per minute with an astounding 130,000,000 gallons of water required to raise the liquid level to cover the solid material in the waste pond.

In an ever-drier environment brought on by a changing climate, how will a uranium mill in the desert stay in compliance with the law? Based on another observation made that day from the air, that remains a perplexing problem. 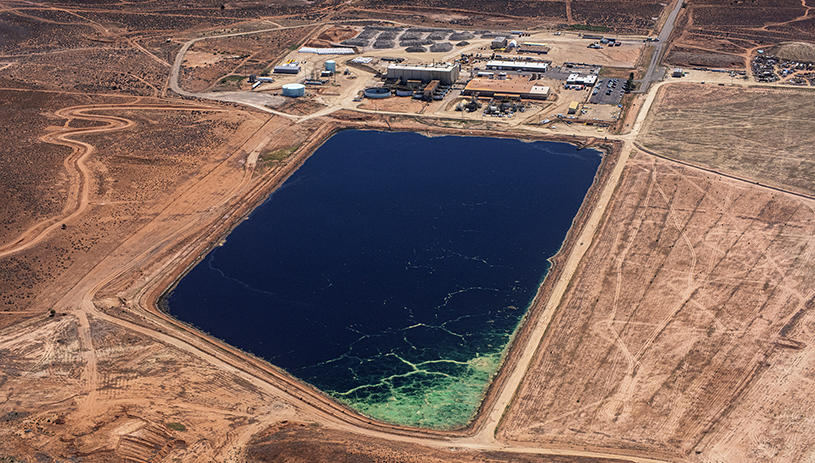 Troublingly, we observed a bright green substance at the corner of another waste pit, the 55-acre Cell 1. 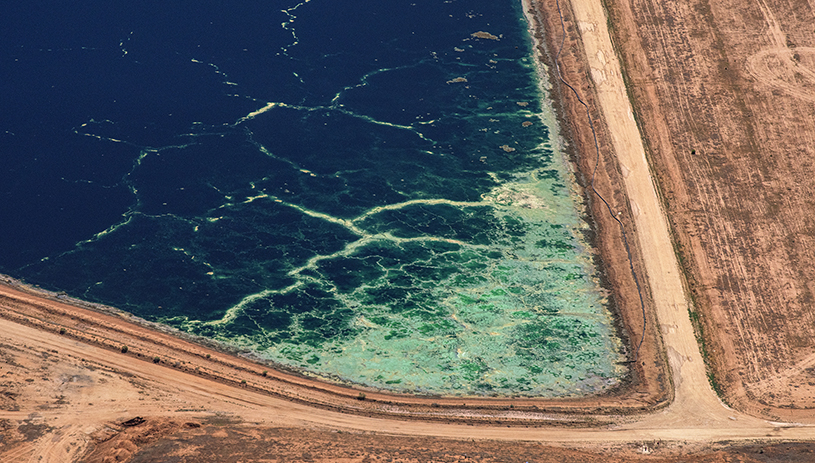 Though it is much older, Cell 1 is subject to the same regulations as Cell 4B: by law, solid materials in these ponds are required to be covered in liquid which acts as a barrier to radon gas emitted by the radioactive material discarded there. The Ute Mountain Ute Tribe and the Grand Canyon Trust have asked the EPA to investigate the condition of Cell 1 and await the agency’ findings.

On July 20, 2022, I met with EPA officials, giving them copies of aerial photos from the last year. In exchange, I was given a July 18, 2022 letter in which the EPA walked back its December decision to stop the flow of radioactive Superfund waste to the mill. This means that the mill can accept Superfund waste again as long as it does not end up in Cell 4B. This is discouraging, especially in light of possible problems in Cell 1.

If the mill can’t manage radioactive material safely, it should not be allowed to accept Superfund wastes again.

Tribal members concerned for their health 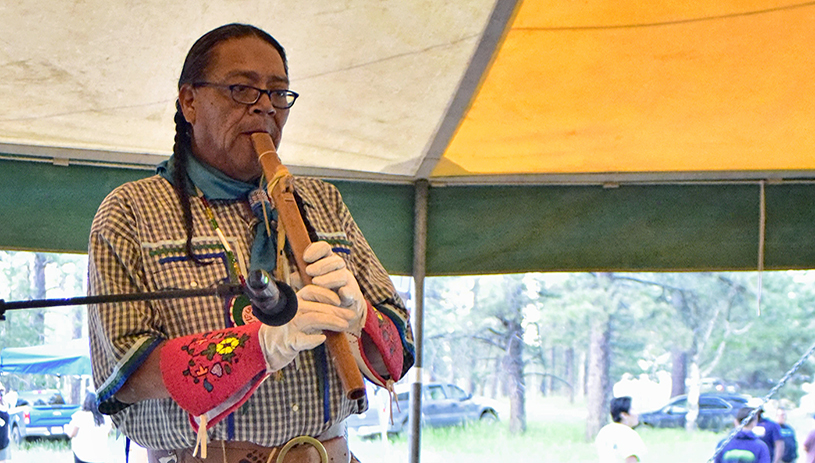 “I raised a red-tailed hawk, and now I know what his view of the mill looks like,” Ute Mountain Ute tribal member and world-renowned flute player Aldean Ketchum told fellow passengers. Ketchum shared how, a few days earlier, he had watched a whirlwind blow up to the mill from the southwest. As the funnel crossed the mill’s property, the cloud changed from reddish brown (the color of the local soil) to grey as it swept over the ore stockpiles that sit awaiting processing at the mill. “What did that cloud pick up when it crossed those ore piles,” he asked, “and is it harmful to our health?”

We just don’t know. Such data is expensive to gather. Soon, an epidemiological study to examine health concerns in the White Mesa Ute community will be designed, thanks to an EPA environmental justice grant. That study will take years to complete. In the meantime, you can urge regulators to take action now to protect people and the environment.