Digging Deep: A Long List Of Permits Stands In the Way Of RMI’s Mine Expansion

Home » News & Media » Digging Deep: A Long List Of Permits Stands In the Way Of RMI’s Mine Expansion

Digging Deep: A Long List Of Permits Stands In the Way Of RMI’s Mine Expansion

Taking a limestone mine from less than 20 acres to more than 400 is no small feat. Not only does it require expensive and heavy machinery to move the earth, it also takes money and persistence to clear a long road of regulatory hurdles before an expansion is allowed in the eyes of the law.ListenListening…4:44

Rocky Mountain Industrials is facing this exact situation with its quarry near Glenwood Springs. While a proposed expansion has engendered plenty of public controversy since its arrival, years of robust environmental studies and a mosaic of permits stand in the way of the proposed expansion becoming a reality.

As part of the series “Digging Deep: What Does RMI Mean For Glenwood Springs?,” Aspen Public Radio spoke with regulatory agencies and independent experts to get a sense of what lies ahead.

“It’s not an easy process, and it’s time consuming,” said Russ Means, director of the minerals program at the Colorado Division of Reclamation, Mining and Safety. “It also costs a lot of money because with a project such as this, you have geotechnical engineers, you have hydrologists, you have lawyers and a litany of other consultants and experts that you have to bring in.”

Rocky Mountain Industrials will need a thumbs up from the Bureau of Land Management and a handful of state agencies before going ahead. While there is no prescribed order in which RMI needs to get those permits, the BLM’s process has drawn the most attention.

The BLM’s main tool for scrutinizing the project is an Environmental Impact Statement, or EIS. Scientists will analyze the area’s air, soil, rock and water to figure out any ways the mine might harm the natural world, and ways those impacts could be mitigated.

That process is the more intense of two possible types of environmental review, and the BLM says it will be carried out to determine whether RMI should be granted permission to expand.

If the EIS finds outsized harm to the environment, RMI’s ambitions to expand could be stopped dead in their tracks. The EIS is a lengthy document that could run upwards of 150 pages and will likely take “at least a year” to complete, said Maribeth Pecotte, a spokeswoman for the BLM. She said EIS studies could begin as early as this fall.

The final product will combine the findings of scientific specialists who examine every element of the environment surrounding the mine site. It will also fold in notes on the area’s importance to recreation and an ethnographic study used to determine the historical value of the land to Native American people.

Those findings could also trigger the need for permits from other federal agencies, too. For example, the U.S. Forest Service or Army Corps of Engineers might need to sign off on the project if portions of it are determined to fall under their authority.

The BLM is also running a mineral exam which could result in two different types of regulatory classifications. One would put the mine under rules outlined in the 1872 Mining Act, while the other could give the BLM more discretion to deny RMI’s permit or add more layers of regulation going forward.

The Public Weighs In

The EIS process has come into the spotlight of the mine’s opponents not only because of its comprehensive nature, but also because of its opportunities for public comment. The public is invited to weigh in on the BLM’s process in an early-stage scoping period, and then again after it releases a first draft of its findings – unique opportunities for residents and activists to get involved in the permitting process.

She cautioned that the comment period is not a “voting process,” and the proposal would not be stonewalled simply due to public opposition. It could, however, come under new scrutiny if the public were to flag impacts that were not considered in the agency’s first pass at environmental studies.

Pecotte and activist groups both encouraged concerned residents to seize on that window.

“If [the BLM] determines through this environmental impact statement that there may be undue or irreparable damage to our public lands, then the agency has the authority – and even obligation, we would argue – to reject the proposal,” Slivka said.

Slivka said she has a renewed level of confidence in the importance of that comment process now that the agency is under the guidance of a new president. The Trump administration had proposed a number of rules to “short circuit” the National Environmental Policy Act, which outlines the need for an EIS.

“Here in the Biden administration,” she said, “We expect that we’ll see much more considerate environmental reviews, good opportunities for public participation, good alternatives analysis, good consideration and mitigation and, we would hope, the direction to deny projects that will have an unnecessarily large impact on our public lands.”

In fact, some analysts think the Trump administration’s interpretation of the permitting process was the only thing that could have made the RMI proposal a reality.

“I think it’s dead in the water,” said Jesse Prentice-Dunn, policy director at the Center for Western Priorities, a Denver-based conservation and advocacy group. “Essentially, I think the worry during the Trump administration was they could have fast-tracked some of the permitting process of it.”

He described that administration’s approach as “remarkable in terms of trying to strip all those protections and shut out the public.” With the new president’s guidance, he said, the RMI expansion has diminished chances of success.

“I think that the project already doesn’t have much going for it in terms of the merits and the environmental impact,” Prentice-Dunn said. “But even if it were a close call, I think it’d be shot down by a Biden administration.”

He said the proposal faces an “uphill battle” on the regulatory front – citing the destructive nature of the project, the expected volume of public comments, and the steep cost RMI will incur by slogging through a lengthy permitting process.

Brian Fallin, CEO of Rocky Mountain Industrials, himself acknowledged the challenge presented by the duration of the permitting process. He identified “timing” as his biggest worry going forward.

“This process is really going from one piece of the puzzle to the next,” Fallin said, “And we want to make sure we can get through those quickly so that we can ultimately see the value with the expansion.”

Aspen Public Radio spoke with Fallin over the phone in February as part of the reporting for this series, during which RMI ended the call after only 12 minutes.

Even if the RMI proposal were to get the federal authorization it needs, it would also have to  clear a separate, rigorous permitting process with the state.

The Colorado Department of Health and Environment will assess impacts to water and air, among other elements of the natural world. Colorado Parks and Wildlife will look for impacts to plants and animals.

The Colorado Division of Reclamation, Mining and Safety will ensure that the applicant has plans laid out to restore the land when they finish mining.

“You’re not going to be making it look exactly like it was before,” said Russ Means with the DRMS’ minerals program. “It takes into account that mining is inherently damaging, but it has to be reclaimed to some kind of use.”

And on top of that, the state opens the application up to its own public comment period, separate from the BLM’s.

“Some of our best reviewers are the general public,” Means said.

The proposed expansion could also face one more legal hurdle. Amid mounting opposition from the area’s business owners and residents, Garfield County has stepped into the regulatory fray.

While the City of Glenwood Springs and Garfield County lack explicit permission to approve or reject the mine proposal, the county introduced a new set of rules last spring that could introduce one more stumbling block for RMI’s plans, which comes in the form of “1041 regulations.”

Those regulations give local governments the power to make planning decisions in areas that could have statewide impact, such as airports, mass transit stops, water supplies and landfills. The county already had 1041 regulations for those areas. In May, they added mining, or  “mineral resource areas,” giving them extra authority to scrutinize projects such as quarries.

The new rules are not a silver bullet, and do not give the county final say on the expansion application. But they do let the county judge new projects on the grounds of “socioeconomic impact” and “environmental impact.” That could allow them to have a say in matters such as pollution and truck traffic.

The extent of the role played by 1041 regulations remains to be seen, but they will add another layer to RMI’s journey to expansion.

Lawsuits at many different junctures along the way will likely add to the length and complexity of that journey. Controversial mining projects are often mired in litigation. Advocacy groups, municipal governments, businesses and individuals who feel like they would be affected by a development could bring regulatory agencies to court if they feel they had not done a sufficient job of screening an application.

The RMI proposal has already spawned a pair of lawsuits, even though much of the permitting process has yet to begin. RMI sued Garfield County in May 2019, arguing that the county had overstepped its regulatory bounds in issuing permit violations. In March 2020, the Glenwood Springs Citizens Alliance sued the BLM, alleging that it was not properly regulating the mine.

The Environment Foundation, funded by the employees of Aspen Skiing Company, made the series “Digging Deep: What Does RMI Mean For Glenwood Springs?” possible through a grant to Aspen Public Radio. 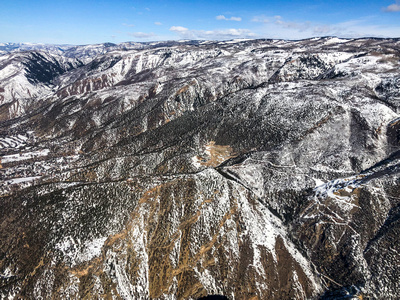